On our first trip to Southeast Asia ever, we went in hot and went straight to Vang Vieng, which is in the middle of nowhere Laos, set against some of the most stunning scenery I have ever seen in my entire life. We flew from Bangkok to Udon Thani, a smaller town in northern Thailand.

Once we arrived in Udon Thani we took a short bus ride north to the border town of Nong Khai where we were meeting up with our friends Jared and Rachel (They had arrived a few days before us). We chilled along the Mekong River for a bit, marveling at the fact that we all finally made it and could relax. The main mode of short-distance transportation in places such as these is a tuk tuk. A tuk tuk is little more than a motorcycle with a covered mini trailer hooked to the back. A normal sized one can fit a handful of people but trust me, I saw many a locals piled into them. So Jared and Al took one tuk tuk and Rachel, Christa and I took another and we headed for the border to cross into Laos. Laos was our first communist country, woo! Going into countries like Laos isn’t like taking a nice trip across the border to Canada…or even Mexico. You are crossing into a country where they don’t observe the same kind of rules as the Western world. If you are caught doing something against the law here, they could very well just kill you if they feel like it and no one would hear about it and they don’t even have to let your home country know what happened to you. It’s pretty scary but you just have to keep a smart head.

Once we did the border protocol and waited 30 minutes on our visas, we exchanged our Thai Baht into Lao Kip (we got nearly one million Kip from the exchange, millionaires!) and crossed the border into Vientiane, the capital of Laos. With our tourist visas and gangster roll of cash in hand we headed for the bus station. We still have another 4 hour bus ride until we eventually reach our destination: Vang Vieng. Once we arrive at the station we realize that we’ve missed the legit tourist buses that head for Vang Vieng. So we negotiate a price for another bus heading that way and hop on. The trip takes 5 hours and a lot of it was on a dirt road winding through the mountains…albeit beautiful ones. We stopped in every little village along the way to pick up things that needed to be delivered to this remote town we were headed towards. Once those grueling and sometimes scary 5 hours were over we had to climb over 20 or so boxes of fish sauce that had been loaded in the aisle of the bus that travelled with us to VV. It was well past dark when we arrived so it wasn’t until morning when I walked out of my room that I saw the striking scenery of Vang Vieng.  The breathtaking, enormous karst mountains were a backdrop for the Nam Song river flowing in front of me. The tropical landscape of this part of the world absolutely took my breath away. 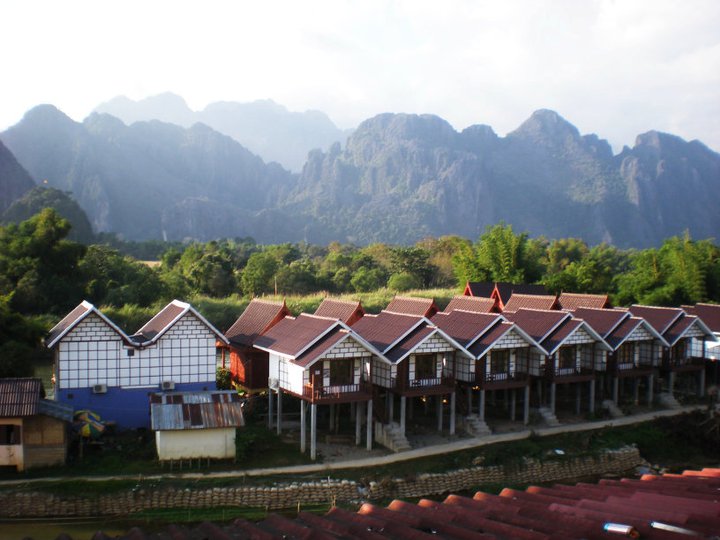 After staring out my door for like 50000 hours we ate some breakfast. I had a giant $1.50 plate coconut sticky rice with pineapple. A-M-A-Z-I-N-G. We wandered around the teeny town to see the local sights before meeting up with everyone. We all stayed at the same guesthouse but Al, Christa and I shared a room on the river and Jared and Rachel  had a room in the main building…I think they paid a whopping $6 a night for their room. (Did I mention Laos is dirt cheap?) I soon discover that foreigners, mostly American, Australian and British, outnumbered the locals by about 10 to 1. I knew before coming here that Vang Vieng was overrun with 20 somethings all here for one reason: to party on the river. I read that tubing down this river is somewhat of a rite of passage before backpacking throughout SE Asia…and here we are.

We met up with everyone, including one of Rachel’s friends who met us here, Kiri, and started Day #1 of tubing. We walked the few short steps from the guesthouse to the tubing office, or rather a dirty garage filled with tractor innertubes, paid our 60,000 Kip ($6) for the tube rental and piled into the tuk tuk. A local man took us about a kilometer or two through town and up the river to the start point.

We carried our tubes another few feet down a hill to “Bar One” which is the first stop on the river. We immediately put down the tubes and got some buckets to share. (bucket =  about the size of a normal sand-castle making bucket but filled to the brim with whatever alcoholic concoction you come up with all for the low price of about 50,000 Kip) Christa, Rachel, Kiri and I head straight for the sunshine to soak up some Vitamin D while Al and Jared hang out in the shade with a little puppy that’s roaming around. We finish the buckets, grab our tubes and head down to the water. We all very ungracefully flop in our tubes into the not-very-warm mountain water and start the slow float down the river. There are many, many ramshackle bars all down the shore, you just choose when and where to stop. The owners of the bars throw out ropes when they see passerbys and if you feel like taking a break they’ll pull you in. We took advantage of one of the ropes and stopped at Bar #4 so we (not me) could have a go at the rope swing. I was too much of a weiner, I have no upper body strength and I don’t think I could’ve held myself on so I passed. After a few more buckets and quite a few rounds on the swing we got back into the tubes and floated down the river some more. We stopped once or twice more then headed back into town before it got dark. After some dinner, questionable green drinks and a very long night we did it all again the next day. We finished the tubing route and at the last bar we spray painted hearts on our skin and the boys took a shot of some local liquor that had bumble bees fermenting in it. You know like the worm in tequila? But bumble bees.

Our last day we woke up and had some breakfast, bought a few souvenirs (a pair of shorts, three shirts, swimming trunks and 3 pairs of sunglasses all for the low price of $12) and chilled until our bus arrived to take Al, Christa and I back to Vientiane. While waiting, Al bought a street vendor sandwich that would eventually give him some vicious food poisoning. We hopped the bus (a real one this time, not a fish sauce one) and started back for the border. Once there and back through customs and immigration (all with a very nice sign saying if you bring any drugs across with you, you will be “put to death”) we cross back into Thailand and back to the Udon Thani airport. We say our goodbyes to Christa and Al and I board our $40 AirAsia flight to Phuket for the beach segment of our vacation.

Today is Friday. I hope that helps. :: Where’s the first place you’re going when this is all over? I just wanna go sit on a patio at a restaurant. That’s all. I’m not asking much. :: :: This was a few Septembers ago in the south of France...Nice specifically. Man those rocks hurt your feet. . . . . . . . . . . . . . #nicefrance #southoffrance #nicebeach #mediterraneansea #mediterraneanbeach #provencealpescotedazur #cotedazur #cotedazurfrance #provencefrance #francebeach #summerinfrance #france_holidays #france4dreams #francephoto #francemylove
Hey all you cool cats and kittens! We made it to April! Let’s lay off the April Fool’s today eh? We’ve already had enough fools to last us a lifetime. :: In other news, my birthday is in less than a week 🙄🙄🙄🙄🙄 Anyone else having (had) a depressing quarantine birthday? . . . . . . . . . . . #bali #baliindonesia #balilife #baliguide #balitravel #balivilla #balivacation #baligo #canggu #canggubali #balipool #cangguvilla #canggucomunity #dragonfruit #beautifulseasia #privatepoolvilla
Currently CEO of staring at my phone all day📱 :: All I see are motivated people exercising and working on things and being healthy and man...that’s just not the Cormier house. We can’t get motivated to do annnnnything! I’ve even been using quarantine as an excuse to eat all kinds of bad stuff that I love but never have in the house like Lucky Charms 🌈🍀 Looks like I’ll be one of the fat ones coming outta this FO SHO. :: How’s your motivation? Like mine or are you getting stuff done? . . . . . . . . . . . #tulum #tulummexico #tulumbeach #tulumruins #tulumtulum #tulumlovers #mexicomagico #mexicobeach #caribbeanbeach #caribbeansea #turquoisewaters #turquoisewater
Instagram: CENOTE TIME Reality: CORONA TIME :: I wish I had words of wisdom for you guys but if you’ve been hanging around here long enough you know I’m not an inspo type of person or account. Maybe just give you a laugh. So just...hang in there. . . . . . . . . . . #tulum #tulummexico #tulumcenotes #mytulum #cenote #cenotes #cenotecalaveratulum #cenotesmexico #mexicomagico #mexicolindo #mexico_amazing #mexico_greatshots #yucatanmexico #mexicocenote
TOP 5 PEOPLE TO BE ISOLATED WITH ⬇️ • Henry Cavill but only with his mustache • 2006 Jude Law • Prince Harry • Pre-blonde Zac Efron • Taylor Swift so we can bake :: YOUR TURN! I saw @agirlwhoblooms ask this and I LOVE this question! GO! :: :: This photo was taken at our villa in Canggu Bali. It was the best Airbnb ever with a huge yard and a private pool and two bedrooms. DM me if you want details for a future trip. Comes with lots of critters. 🦎 . . . . . . . . . . . #canggu #canggubali #canggulife #canggucommunity #cangguvilla #baliindonesia #balidaily #baliguide #balitravel #balivilla #baliprivatepoolvilla #baliairbnb #balipoolvilla #privatepoolvilla #privatepoolvillabali #indonesiaparadise #seasia
Who remembers places? :: :: Starting week 2 of our isolation and for some reason this one feels different than last week. Last week felt like a weird staycation while this Monday morning has more of an ominous vibe. What is our new normal? Things are slowly shutting down around here (and calling for minimum of 8 weeks of it) so the near future seems so uncertain and grim. :: BUT! We have to look at the bright side, like my aunt is going to attempt to show my grandma in West Virginia how to use FaceTime. There has been a big family dinner at her house every single Sunday since I was a baby and yesterday was their last one for a while. So teaching her how to FaceTime and still being able to talk to her makes me grateful this isn’t happening in 1992 or something. . . . . . . . . . . #cotedazur #provencefrance #provencealpescotedazur #southoffrance #francecoast #frenchriviera #mediterraneansea #turquoisewaters #mediterraneanlife #cannesfrance #antibesfrance #france_holidays #france4dreams #france_vacations #francetourisme #francetravel #francemylove #hellofrance