Imagining Malaysia doesn’t always elicit images of pristine beaches, but alas! They are there! Along the eastern coast there exists several islands, many of which are perfect holiday destinations if you are looking for white sand and blue water. We found just that on Perhentian Besar. We accidentally went during Ramadan and much to Al’s dismay booze was scarce.
Original post 10/7/2012
After landing in Kuala Lumpur we breezed through customs and skipped over to the domestic terminal where we had another short one hour flight to Kota Bharu. Before going, I had read that Kota Bharu (and the state that it is in, Kelantan) is an Islamic state and to simply respect the customs by not walking around in a belly shirt or anything. Easy enough. Once arriving, Al soon discovered that not only is it an Islamic state but you can’t buy alcohol anywhere. Needless to say he was pretty bummed.
Being this was my first visit to a Muslim country, I didn’t know what to expect. 95% of the woman have their heads covered. I felt extremely uncomfortable, not because of my surroundings but because I was in a tank top and shorts. I saw very few other women without head scarves and I don’t believe I saw any others in shorts. I really felt horrible and hoped I wasn’t offending anyone or disrespecting their culture, I just didn’t do as much research as I probably should have. Apart from my feeling out of place in my shorts, the Malaysian people are beyond nice and hospitable.

We went to bed early and got a very good rest on a much, much softer bed than the slabs of cement the Koreans call mattresses. We decided we wanted to get to the island first thing the next morning so we woke up at 7:30 to catch the 9:00 bus to Kuala Besut, the coast town with the boats to our island, Perhentian Besar. The bus only costs around $1.50 for the hour ride and a taxi is about $15 so we chose the cheapest option. After finding a cab (the driver was the jolliest Malaysian man ever) he told us he’d drive us to Kuala Besut for 40 Ringgit (about $10) and we were already in there and comfy so we just let him. I really wasn’t sure the car was going to make it, the state of their taxis is a little more than worn. They surely wouldn’t pass even the least stringent of inspections back home. Since there was no air con, I rolled down my window (with a crank) and settled in to watch the sights for an hour.

If there’s one thing I’m a sucker for, it’s palm trees. The coconut producing kind. Southeast Asia definitely has no shortage of them, obviously. It’s like looking at them is reassurance that I’m somewhere tropical…which is really where I’d like to be at all times.
Along the road there are chickens and vegetable stands and barefoot kids…and a Durian stand! Durian is native to Southeast Asia and is regarded as the world’s worst-smelling fruit. It’s even banned from a lot of hotels (there was a sign in ours staying not to bring any in). People either love it or hate it. I was dying to try some but I never got the chance, I’m really disappointed about that.
We finally arrived in Kuala Besut starving. We got our boat tickets and wondered around the cute little town to find a restaurant to grab some breakfast.

We found a place that had foreigners eating at some tables so we beelined for that place. Since I’m not a breakfasty person I just got a Malaysian style pancake. OMG. I want to learn how to make them. It’s thin, flat and not sweet. I ordered a “lime and sugar” one and they brought me a slice of lime and some sugar to sprinkle all over it. I rolled it up and I was in heaven. Al got some chicken curry something or other.

At 10:30 we boarded our little boat and set out on the South China Sea towards the Perhentian Islands. There are two of them and we stayed on the big one, Besar. It’s more quiet than the smaller island, but the beaches are significantly better, which is what I was after…pristine beach. We scrambled off the boat and walked to our resort, which was the only one located on this particular beach. The resort itself is very run down and needs some serious TLC but it’s located on the best beach on either island so I didn’t care about the condition of the resort. I mean does this bare bones room matter…

…When you have THIS outside your door?

Since these islands are still semi underdeveloped there are no roads or scooters or any nonsense like that. A few resorts you can walk to and from across a path and there is one path through the jungle (and I mean, literally, a jungle) to get from one side of the island to the other. We decided to take that trek one day and it was beautiful! 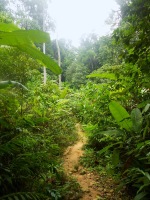 …Until we ran into this millipede.

The rest of the days were full of relaxing and snorkeling and really just marveling in the beauty of the island. I like a palm fringed beach and that’s what I got. There’s nothing like laying on soft white sand and looking straight up and seeing giant swaying palms. NOTHING. 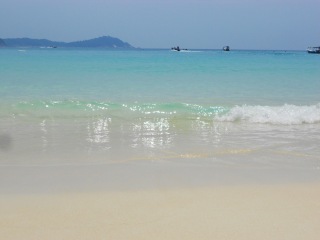 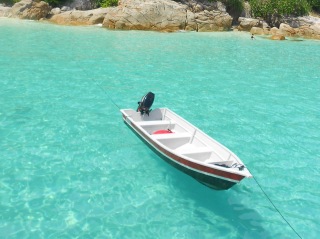 On Saturday, our last day, I woke up very sad to leave. We had breakfast, lounged on the beach and had one last swim in that beautiful water before getting the boat back to Kuala Besut at noon. We had some lunch at the same place we had breakfast just a few short days previously, found some souvenirs at a little shop and then got a taxi back to Kota Bharu. We didn’t fly out until 7 so we wandered around the town for a few hours.

Our flight from Kota Bharu to Kuala Lumpur was uneventful. Once back in KL we had a five hour wait until our 1am flight back to Korea. Air Asia might be cheap, but it’s ridiculous that 1am is the only time it flies from KL to Seoul. Since we were stuck in economy on a low-cost carrier, it means that comfort is minimal and it was the longest flight of my life. I didn’t sleep. I can’t remember the last time I stayed up all night…and this time it wasn’t for a fun reason.

Once back in Seoul we quickly got through customs and immigration (More stamps! Yay!) and headed back to Seoul Station and then on to Myeong-dong so I could go to Forever 21. I found a few things but was rushed from being short on time. Hopped the train back to Busan and here I sit, in my stifling hot apartment wishing I was back in the Perhentians watching those waves roll in.

Here’s to a good rest of the summer!