We concluded our Europe trip with a four day stopover in Iceland. W-O-W.

It seems impossible that Iceland is a part of Earth. Just for some quick background information, Iceland is one of the most geologically active countries on the planet with hundreds of volcanoes and frequent earthquakes. In this aesthetically odd country exists  many geysers, waterfalls, geothermal pools and glaciers…and some can seen from the main road! There aren’t many people; only about 300,000 in the entire country. Because of it’s geological activity, the landscape is rough and wild giving it a kind of Mars-like appearance.

We arrived to cloudy and cold, much of what I was expecting, even in May. I think the high temperatures in the middle of summer only reach about 60 degrees. The highest temperature ever recorded in the capital is only 79 degrees! It was in the 40s during our stay, so not too bad. The bus from the airport into Reykjavik (RAKE-ya-vik) takes about 30 minutes of driving through nothing but lava fields. (Fun fact: Reykjavik is the Northernmost capital in the world.) My first thought looking out those bus windows: I’m not on Earth.


We only had a few days there, but had a plan in place. We were spending the first afternoon we arrived and the following full day and night in Reykjavik and then renting a car and driving the Southern coast to Jokülsárlón for one night before driving back to Reykjavik to catch our flight out. We checked into our guesthouse and then went to explore the city. Iceland is expensive!!! Beautiful, but by far the most expensive place I’ve ever visited. For example, a plate of pasta at a restaurant was about $30, a cheeseburger was about $20, fish and other local foods ran about $30-40, a can of pop was $3-4, a bag of chips or other snacks was $6 or so. The place we stayed was really nice but just a guesthouse and it was one of the cheapest rooms in the city at about $110 a night…and that’s without a private bathroom! Only shared.

Reykjavik is full of colorful houses and rooftops all sitting on the ocean with snow-capped peaks behind it. Perfectly picturesque. (But so are the people, Icelanders are gorgeous!) 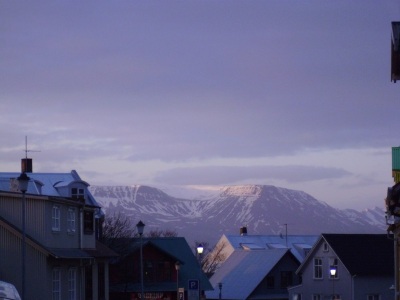 The second day we had a full day, so we went to the world-famous Blue Lagoon. If you’ve ever seen any travel pictures of a milky blue pond surrounded by rocks, that’s what it is. 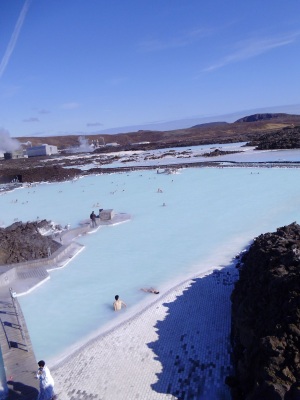 The Blue Lagoon is a geothermal pool. As pretty as it looks, the story of how it got there isn’t as pretty since it’s actually man-made. Most everyone in Iceland uses geothermal power and in the 1970s a geothermal power plant was built right in the middle of, what else, a lava field. Water run off from the plant formed a huge pool rich in minerals like silica and the lava flow under the ground heats it to around 100 degrees. People started bathing in the water saying it did wonders for their skin and voila, a spa was born. They use the minerals in the water to make all kinds of (expensive) skin products and while bathing in it, you can slather your face and body with the white silica mud found in it. So basically everyone is swimming around in this lava-heated lagoon covered in white paste. It’s a good time. I have to say, the mud did make my face feel nice, it’s quite an exfoliate. We paid a little extra for a more premium package instead of the just the entrance fee and got bathrobes, towels, free face products and a free drink from the Caribbean-style swim-up bar in the lagoon. 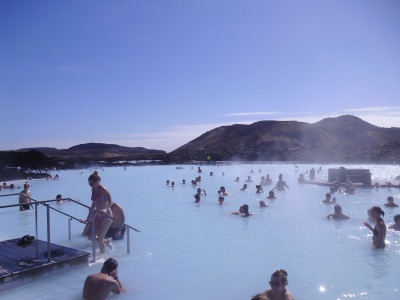 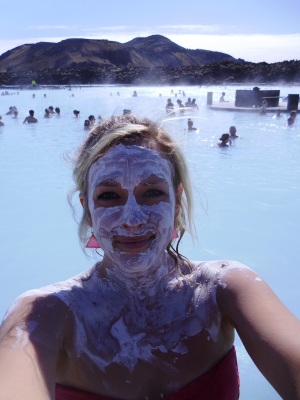 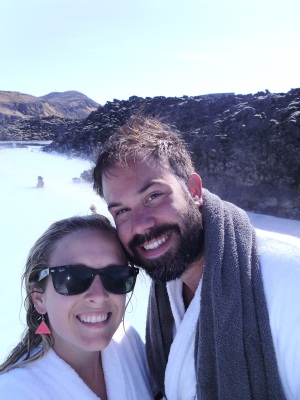 We spent most of the afternoon at the Lagoon, then we went back into the city to spend the evening and found a cool Viking boat metal sculpture. 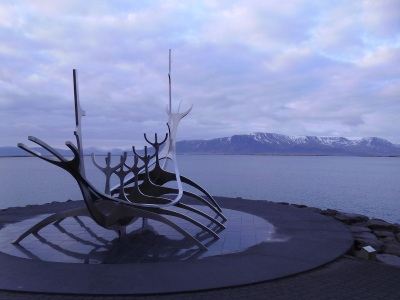 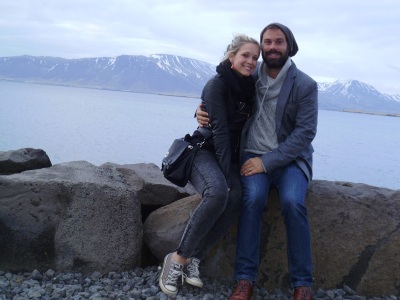 The next morning, we picked up our rental and got on Highway 1, the “ring road” around Iceland. Iceland is very, very sparse and so there is basically one road around the entire island. I’m going to go back one day and do the entire loop for sure. We were driving all day due East and stopping at all the sites along the way until we reached Jokülsárlón, the glacier/iceberg lagoon. Along the drive we saw waterfalls… 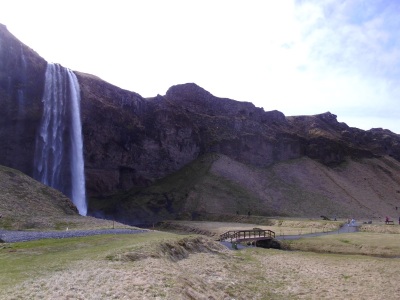 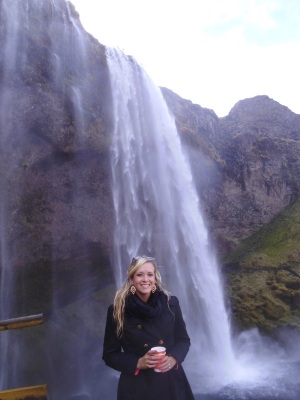 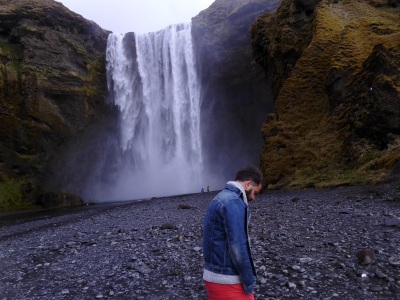 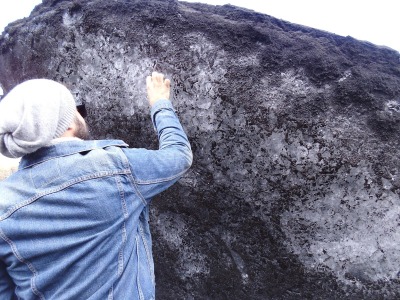 And even some volcanoes… 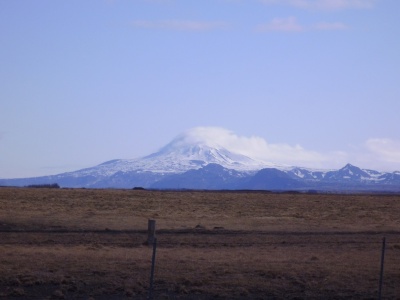 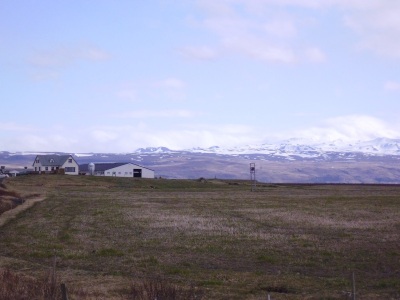 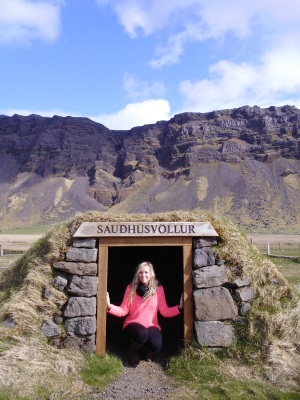 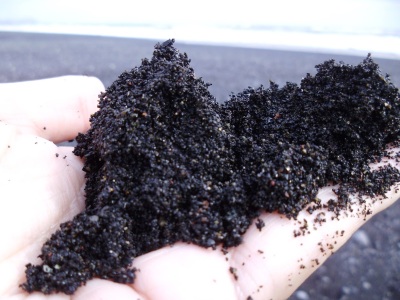 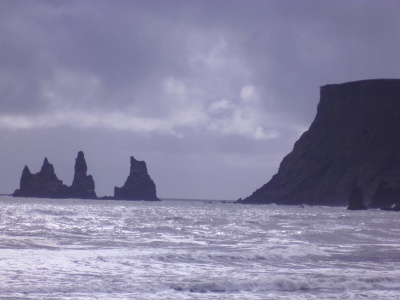 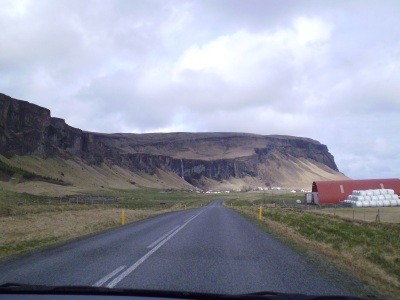 The end of our journey eastward was the Jokülsárlón (yo-khuls-AR-lon) Glacier Lagoon. These huge icebergs break off of a large glacier into the lake that sits at the foot of it. This lake sits directly inland from the ocean and we sat on the edge of the water watching these behemoth chunks of white-blue ice drift lazily out to sea. Occasionally they would run into one another and break apart or larger chunks would break from the tops and fall into the water. It’s so loud when this happens! The crack sound would echo across all the Icelandic nothingness. It was almost haunting. 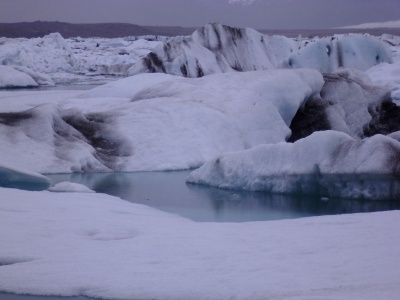 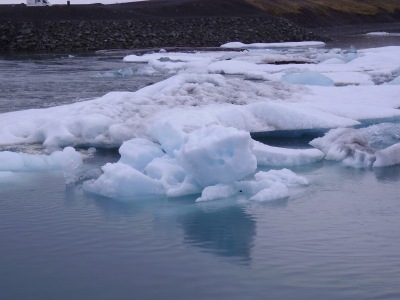 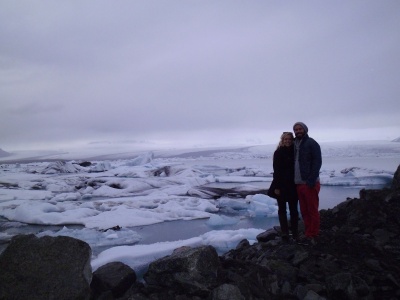 Between the iceberg lake and the ocean was another black sand beach. What made this beach unique were the hunks of ice that washed up onto the shore. I’m not sure how, but I’m guessing that once the icebergs from the lagoon make their way out to sea, they end up breaking up and somehow make it back to this beach. Or perhaps I’m way off. Either way, the contrast of the black sand and the ice was just ridiculous! 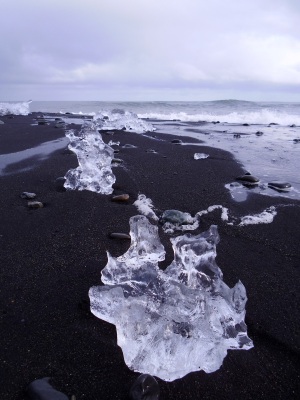 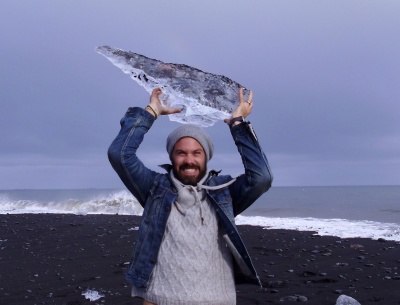 We were spending the night in a B&B farm (pretty much the only dwelling for miles and miles) near the town of Höfn. We drove into the little town for some dinner and found some pretty fishing boats. 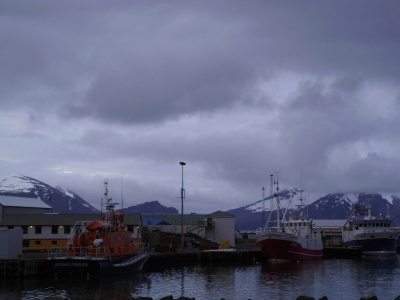 Our flight was the next day at 5:00pm, so we got an early start to drive the 5 or 6 hours back to Reykjavik to catch our evening plane. We woke up at 4:30am, and this is what it looked like outside when we left!

We had plenty of time to kill when we got back to the city. We dropped off our rental car and the guy offered to drop us off back in town. He was about our age and told us all about growing up and living in Iceland. It was fascinating! He said that everyone in Iceland learns English and Danish as a second and third language, and once students reach (I think) high school, they have to pick a fourth language to study. As far as food goes, he said at traditional meals his mom would put full animal heads (sheep I think) on the table and everyone would dig in. He said his father’s favorite was the brain and ears. Nothing is left of it but bone when it’s finished, I guess.

Al and I were actually on our way to the flea market to try some strange food ourselves. We had heard tale of this delicacy called Hakárl and wanted to try it. Basically, it’s rotted, fermented shark. I guess the Icelanders get a real kick out of tourists coming in and trying it and give it as samples at this market. It’s one of those things that you have to check off on a list of things you did while in Iceland, so we weren’t going to be left out. Some of those famous food guys on TV have gone to Iceland to try it and Anthony Bourdain said it was the “single worst, most disgusting and terrible tasting thing” he’s ever eaten. He wasn’t wrong. A news crew spotted us getting ready to try it and rushed over to film it. They found it hilarious.

The ammonia content is really high, so it felt like my mouth was burning off and then it burned the entire way to my stomach. To describe it perfectly, imagine, if you will, the foulest, strongest fish flavor imaginable and then mix that with rubbing alcohol. Got the flavor? Now turn that solid and make it really rubbery and nearly impossible to swallow. That’s Hakárl, an Icelandic favorite.

We walked back to the bus station (Reykjavik is not very big despite being the capital) where we’d get our ride to the airport. Our three days wasn’t even close to being enough. I’d love to go back in the middle of each summer and winter. I’d love to experience 24 hours of daylight and in the winter is the best time to catch the Northern Lights. Luckily, Iceland Air is impossibly cheap so I’m sure I’ll go back again.

I’ve been to a lot of different kinds of places, but Iceland is for sure at the top of my list of favorites, partly because it’s so unknown to travelers. I’ve now been to a place that very few people get to see in their lifetime and that gives me a huge thrill. It’s also so unique and truly one of the most beautiful places I’ve ever seen. I just wish we would’ve had more time! 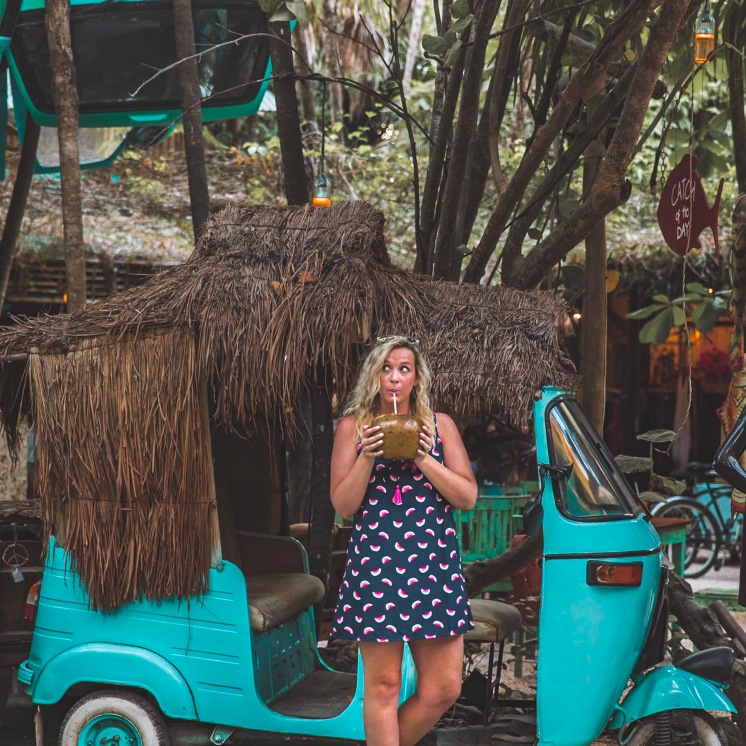